In memory of Dave

January 19, 2019
Most of my quilting time this year has been spent on making Memory Quilts from my dear Brother-in-law's shirts and pants - mainly jeans. He died last year - January 17, 2018.

After the four (grown) children, (10) grand- and (3 + 1 on the way) great grandchildren had taken all of the things (shirts, ties, etc.) they wanted, I finally (in April) said I would take the shirts and work with those. Later I also took his jeans and some of his slacks. Later Sherry found additional flannel and heavier shirts and jean jackets which I used for the pillows.

I spent a lot of time "de-boning" his shirts, and cut a LOT of 6 1/2" and 4 1/2" circles from the jeans and pants. I cut mainly the darker shirts into 6-1/2" x 8-1/2" patches. At first I tried cutting the shirt pockets into the patches, but it was "wasting" too much fabric, so I ended up removing most of the pockets. The light colored shirts I cut into 1-1/2" x 8-1/2" patches and made uneven rail fence blocks that ended up 8" square finished.  From the scraps of the shirts I cut 4-1/2" and 2-1/2" squares for the pillows. I made 4 patches from the smaller squares and used the larger squares as they were.

I made a total of 5 quilts and 15 pillows. I printed out special labels for each of the quilts and used a different label for the pillows which I fused on. The pillows are made with shirt fronts for the back of the pillow including pockets. The Quilts:

I was able to make binding from the scraps of various shirts, so the only fabric added was the backings - seen under the labels.

This may seem like "generic" reporting, but believe me when I say that these shirts also absorbed a lot of tears as I made them with so much love for my dearest sister-in-law, my nieces, nephews and their children. I didn't plan it this way, but the packages for the niece and nephew that live in New York arrived 1-17-2019, the anniversary of Dave's death. They were so grateful to have them that day.

If you're still reading - No, I don't make quilts like this for anyone else. It is a difficult labor of love. If you need such a quilt, I generally refer to Quilted Memories in Overland Park, KS. They do this as a business. There are other quilters that make these who are easily found with a little Googling.

Popular posts from this blog 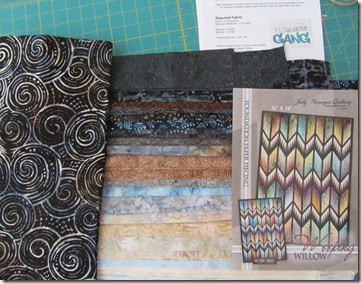 Getting ready for a retreat next weekend. This is my project as we will have a work on anything session with a certified Quiltworx instructor, Eileen Eubanek. I’ve cut my own jelly roll strips as this is to hang next to my Glacier Star on the stairwell. It will have a blue black as well.

I've been sorting UFO’s, seeing if I can kit some up for the Guild’s Boutique since I am in charge of it this year. I unearthed these, but I’m not ready to give up on them, yet.

I’m also cutting up some Dr Seuss fat quarters to make this quilt – I think. . . .

Can I make a table topper out of this orphan? It’s too much trouble to make these blocks . . . . I’m not sure what to do with the rail fence blocks, another UFO that didn't sell at last year’s Boutique.

This doll bed is an estate sale f…
Read more 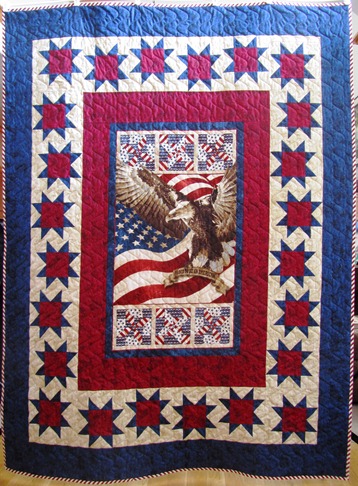 The guild has a challenge to make a quilt out of a panel. I had something different in mind, but this is what I could finish. It is a Quilt of Valor that will be going to a Viet Nam vet – way past time for them to be honored.

The second picture is an open journal cover that DGD2 and I made for a gift for her mother. She’s drawn the P’s on it with permanent marker since she didn’t ask soon enough to piece one in. These are scraps from DD’s wedding quilt and DGD’s baby quilts.